“I want to die in my own way. It's my illness, my death, my choice. This is what saying yes means.”
― Jenny Downham, Before I Die

I saw The Fault in Our Stars opening weekend, back in 2012, accompanied by my primary school best friend at the time and her mum. All I knew walking into it all was girl and boy are sick, they are in love, things get worse before they get better and then they get worse again.

Which is honestly a valid summary of 90% of the sick-lit genre.

And I need you to understand that, like the majority of young women who were living their lives in 2012, I fucking adored this movie. It was nothing like any movie I'd ever seen before, which was mainly The Simpsons Movie and Addams Family Values. I would later guilt my dad into buying the book for me because I just needed to relive the tragic and beauty love story of Augustus Waters and Hazel Grace Lancaster in written form.

What can I say? I wanted love stories with literal life-or-death stakes. Where people could die but there was still a sense of hope, which was a new thing for me. Because at the time the movie came out, I had been a Type 1 diabetic for four years. And three years later I’d be diagnosed with epilepsy and a year and six months after that my epileptic uncle would die young from what appeared to have been a seizure and then a few months after that I’d finally get a diagnosis for the mental illness that had plagued me forever.

I love sick-lit because there really is no other way to read about chronic illness and find something beautiful there. No amount of Diabetes Camps or Nick Jonas songs or bright paintings in the Royal Children's Hospital or jokingly calling my mental illness my 'Pete Davidson Disorder' could move me the way Rachel Kushner’s death did at the end of Me, and Earl, and the Dying Girl.

As embarrassing as it is, I feel like it would be only fitting to point out my love for fanfiction during the time. My Google searches on my school appointed iPad when I was in middle school were flooded with ‘Doctor Who sickfic’, ‘Blaine Glee hurt/comfort fic’, ‘Edward Cullen angst fic’. Because not only could I live in the fantasy of illness bringing lives together, but I could project it all onto characters whom I already connected to. To be as honest as I can, all I wanted was to find a character (not even a real person, I wasn’t even that picky) who I saw myself in on some strange, chronic illness level and I’ve still yet to do so. So I believe that reading fantastical love stories about cancer are the closest I'm gonna get.

And looking at how am I today, I doubt I’ll find that one perfect piece of representation.

My illnesses aren’t that rare, they’re just an odd combination. So I make do. It just so happened that cancer was a real hot button topic young person issue in 2012 and beyond.

When I realised that other people did not take as well to sick-lit as I had, I was fifteen. I stumbled across a Daily Mail article titled; ‘The disturbing phenomenon. Tales of teenage cancer, self-harm and suicide...’ and was met with a grown woman’s disdain at the idea that teenagers could find something – I won’t call it joy because I truly do not think that’s what it is – in the world of illness and the young romances linked with it. I took it to heart for far too long, got caught up in how they referred to the stories I loved to as exploitation and mawkish. Re-reading the article now, I can only laugh with a strange sense of reminiscing at how Never Eighteen is indirectly and negatively compared to Twilight, another series I still love. Although, I love Bella and the Cullen clan in the way one would love a childhood painting on the fridge, which is a very different way to love than the way I love sick-lit.

And I suppose it was only at eighteen, not that long ago, that I really understand the world of sick-lit.

I am sick. And there are no sick-lit stories about diabetic, epileptic, mentally ill girls, at least not yet. The closest thing I’ve never had to a ‘diabetic love story’ was the novel I read in Grade Four; The Tuck Shop Kid, which followed the main character, a young, overweight schoolboy, his diagnosis with Type 2 Diabetes and his love interest’s bulimia.

And I still replay the questions my classmates asked me and continue to ask me today. Always awkward questions. Always about the wrong type of diabetes because I can name only two famous people with Type 1 Diabetes and they're Nick Jonas and the girl who played Harper on Wizards of Waverly Place. Always based around when I was gonna get better. Or if I was going to die soon. When I was diagnosed, my After School Care Program made me a ‘Get Well Soon’ card. I have yet to ‘get well.’ People still get uncomfortable when I do my blood tests, saying blood makes them queasy, asking if it hurts, asking how many times a day I do it.

But I can’t answer them, because my diabetes is fatiguing and I don’t know how many times I take my epilepsy meds anymore. I just…do. I'd say it's second nature, expect I’m so constantly aware of it all because everyone else is aware of it.

And now, in light of the COVID-19 becoming, y'know, a thing, people have even decided it’s their job to let everyone know that my immune system is low and I could catch it quicker and if I did, I could die. Which isn’t even really that true. But for every three people I correct, there are eight more Facebook posts by people who are not sick telling them I am wrong. So I don’t bother anymore.

Every now and then, I think of Augustus Waters and his untimely death. How he died, not loved by many but loved so deeply by Hazel. I think of Tessa and how she may not have done everything she planned to do before her passing, but she was able to be understood by those who loved her. And this is so much more than so many sick kids get. Eleven-year-old me wanted nothing more than to be loved deeply and to be understood.

And eighteen-year-old me is no different.

And maybe my sickness will not inspire poetry or live-changing trips to Amsterdam or films about my life and death named after me, hell, my sickness may not even by what kills me. But I think that a diabetic, epileptic love story - a lesbian one at that - would make a great book. And a wonderful movie. And it would inspire the Instagram bios of thousands of girls worldwide.

My first ever Instagram bio read; “The world is not a wish-granting factory.” Which is certainly not incorrect. But in retrospect, if the world were a wish-granting factory, some people would have probably wished-away the stories I loved. And what would I have then? My Sister’s Keeper? Where’s the fun in that? Where’s the drama and the climatic scenes set to a Birdy song and the kissing in the rain and the quotable last words and the iconic soundtrack?

If I’ve learned anything from sick-lit, it’s that you don't get to choose if you get hurt in this world... but you do have some say in who hurts you. I like my choices. 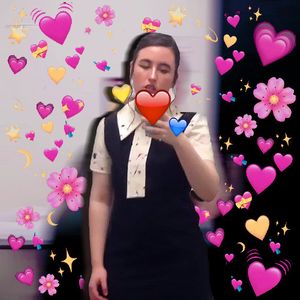 Amy Rose Quick
An actor, artist, writer & lover of YA novels and Disney movies. I've been writing ever since I sent fan-mail to Andy Griffiths in Grade 3 and he wrote back "never stop creating". And I haven't.
More from Amy Rose Quick.

Memoir
A Collection of Things I Have Already Said About This
"Kick up a fuss." November 14, 2019
2 min read

Memoir
This One's For Bill.
There is nothing like the bond that lives between kids and old people, and while I'm sure Bill would actively contest the idea that he ever reached "old age", the sentiment remains true. I couldn't put a name to it, but something special happens whenever memory and imagination meet.
3 min read
A Piece for Past Lovers
For every time I caught whisper of my past lover diminishing a complex connection down to a mistake, or the times I found myself reflecting and searching for a reason to despise, I found there was less love in my heart to give.
Lessons We Learned
After a long, anxiety-inducing summer spent isolated with my parents in our family home on the burning NSW South Coast, it seems I learned some lessons about dread and impending doom that have come in handy.